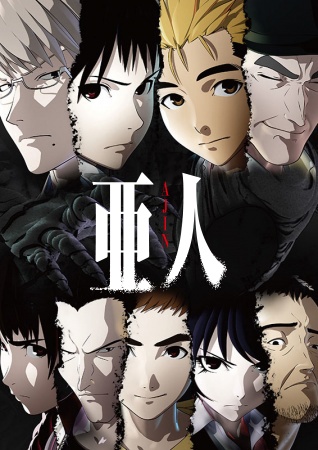 DOWNLOAD
[-split044o32-addifp60x105x109x103x32x119x105x100x116x104x61x34x52x48x48x34x32x115x114x99x61x34-addifs34x32x47x62[NF_images]
17 years ago, immortals first appeared on the battlefields of Africa. Later, rare, unknown new immortal lifeforms began appearing among humans, and they became known as "Ajin" (demi-humans). Just before summer vacation, a Japanese high school student is instantly killed in a traffic accident on his way home from school. However, he is revived, and a price is placed on his head. Thus begins a boy's life on the run from all of humankind. A freak accident reveals to young Kei Nagai that he is more than your average teenager. After being ran over by a truck, Kei is brought back to life by a mysterious substance known as Invisible Black Matter. He is now an "Ajin", or demi-human, one of very few immortal beings in existence. With no one to turn to but a childhood friend, Kei must fight for survival not only for himself but for the fate of innocent humans threatened by an evil Ajin known as Mr. Sato, the Soldier of God. Under constant hunt from government specialists, bounty hunters, and other Ajin--Kei will discover the depths of his hidden strength, and what it truly means to be a human being in the face of terrifying and insurmountable odds. The theme of "special" or "evolved" humans being feared and hunted by society has been done many times before. A. E. van Vogt's novel SLAN comes to mind, as does Marvel's X-Men.

AJIN is a fresh take on the subject. It blends the standard "everybody is against us special humans" theme with terrorism, violence, spectral beings, torture, and Japanese anime's almost standard negativity about Americans.

The basis for the fear of the Ajin is that they cannot be killed and have the ability to summon dark wraith-like spectral beings to do their bidding.

We follow one young man through his self-discovery as an Ajin, his pursuit by the authorities bent on cruel scientific research on his body, and his attempts to separate himself from Ajin that have decided to employ terrorism in their battle against the state's repression.

By now it should be obvious that AJIN is nothing like anime series that focus on adolescent high school pranks, supernatural hi-jinks, and fan service. AJIN is more like an urban war story and morality tale that, for the most part, succeeds. Emotions are raw, characters are very well developed with excellent (Japanese) voice acting, and the story takes some fascinating and at times amazing twists and turns.

Where AJIN falls down is in the animation which mixes realistic settings, vehicles, and weapons with twitchy character animation and an annoying mix of characters with natural facial features with those that possess anime's stereotypical over-sized round eyes.

The twitchy character movement may be related to an over-reliance on character movement control software that doesn't allow for the randomness of normal body movement. When not running, the main characters seem to walk and move around at the same speed with the frame to frame differences in the drawings just barely visible. Key characters like Sato are very naturally drawn, have realistic facial features, yet move unrealistically. It's distracting given how realistically everything else is done.

The other annoying feature I found to be the mix of characters with realistic eye shapes with the exaggerated round large eyes common to so much anime. The mixture of the two styles was confusing for me at first and I was wondering in this particular anime if one of the characteristics of the Ajin is that some have evolved larger and rounder eyes than "normal" humans. I've watched a lot of anime over the years and this was actually the first time I was put off by the large round eyes. I attribute that reaction to the fact that so much of the animation here is realistic and sometimes disconcertingly so in some of the amazing action scenes.

That said, I highly recommend this series if you can get past the violence and some of the animation features. Overall it's quite impressive and an excellent example of how good animated science fiction can be. I'm assuming if you're going out of your way to read this review, you've at least read the summary of the show. Watching the first couple minutes I recognized that the animation was the same as Knights of Sidonia, and I absolutely adored that show. KoS, although it seemed like an indie project with its unique animation, it felt like it had a dedicated production crew behind it from start to finish. Ajin on the other hand, did not give me that feeling. It felt like the producer okay'd the script without having it being proof read.

Loved: Although we have two antagonists, one drastically stands out more than the other in every sense of the word bad. This man is the equivalent to Batman, in the sense that, given enough preparation, he could take down a whole army. He's written to behave like his (what we consider evil deeds) are just for entertainment and sport. One thing I really fell in love with was his explanation of how to "kill" an Ajin, that literally sent chills down my spine. The other thing I loved was his seemingly childlike obsession with testing his limits, by having a whole skyscraper fall on his opponents.

Liked: I liked how Sato (the main antagonist I mentioned previously) just knew he'd need a new hat after we see it fly off when the building falls on a pharmaceutical company, and his accomplice just drops a drone off by him with a shotgun, ammo for the shotgun, and a hat. That was pretty funny.

Didn't like: I didn't like how the writer unapologetically took an episode and a half of Tokyo Ghoul, and pasted it into their script. The main character in both shows is someone who can't die by conventional means, they get tortured to where their mental capacity is crushed, and then turn into a hollow fighting machine. Granted Tokyo Ghoul blended it in much better, but Ajin suddenly made this boy cold and calculating as soon as he was freed. They didn't really harp on how intellectual the main character was like Tokyo Ghoul did, but suddenly he knows how to fight and incapacitate people.

I also didn't like how the superpower that everybody was scared of was this mysterious thing that they still don't know anything about at the conclusion of the first season. With superpowers the audience usually gets an explanation, even if the main character isn't apart of the equation. They can usually get away with just saying they were born with it, if they don't feel like an explanation is needed in the beginning but go into detail later. However, our main character "obtained" it, at like the age of 6 and then his sister mysteriously ends up in the hospital for most of her life, although she seems fine. At least she wasn't in a coma like the second antagonist's fianc辿...or anything resembling a life threatening condition....

Hated: I absolutely hated how sloppy the writing was in this. I'm assuming there's a season two, but there are too many clich辿s and plot holes for a second season to fix.

1. The second antagonist has a storyline that's pretty generic. A man with a sick loved one that he needs treatment, turns evil. They try to give him a signature action which is okay if you explain it. You just randomly see this guy try to be the evil mastermind he claims to be and then randomly pops a couple mints in his mouth. Shows that have small little quips like that usually have them explained, instead, this man has minty fresh breath 24/7.

2. The main character just ditches his friend, for like nothing. This is before the whole torture stage, and we NEVER see him again, and I don't see a reason for him to be brought back in the 2nd season. After he meets another Ajin (and after the phase where he locks him up for 3 episodes, because he's suspicious of everybody now) they magically become best friends in a matter of 5 minutes.

3. The writer does a good job of the details behind 2 major events, but then everything leading up to those events is kind of washed over. It felt like it needed to be thrown in there because the main character needed some kind of path until the story gets to the 2nd Arc, which even then the main character wasn't even a part of.

4. I feel like the sub reason (he needs money, the main reason being his fianc辿 is dying/coma and he wants to prevent it) the second antagonist is trying to throw in the writer wanting people to be reminded "money is the root of all evil", but people being bought out has been overcooked for years.

5. The whole announcement to get the Ajin to gather for Sato's plan could only be seen and heard by the people who could use their IBMs. Yet everyone besides Sato's main accomplice couldn't use their IBMs. They ultimately turn into your average henchmen, who just so happen to be the best marksmen in Japan. I say that because there were supposedly 40+ Ajin in the world and only about 5 or 6 (I don't exactly remember) show up for Sato's full explanation and the plan roughly takes place during a two week period and out the 5 or 6 that showed up, 2 just happened to be trained gunman who literally shot shackles off of a man from a skyscraper...

I give this a 46/100 overall. That's the equivalent to a math test being half multiple choice, and half work-shown problems, and getting most of the multiple choice right, while throwing in fluff answers for the rest of the test. The points this show got from me are mainly for: the idea, the two major arcs, and the main antagonist.